Just recently, Mirepeisset’s Mayor Andre Ratia, sent an official letter to the Mayor of the neighbouring village of Ginestas, complaining that a few of their youths who are courting some of our young girls had not been ‘polite’ towards some elderly villagers.  Not that they had used foul language or thrown stones or indeed been brandishing weapons they shouldn’t have..  No, it was that they had not shown enough ‘respect’ to the aged by saying ‘Bonjour’.

Good manners are still important in small French villages. They are considered part and parcel of a child’s upbringing, even though the general world trend is to think of them as out-dated as unnecessary.  My own sons thought it hilarious when some French boys in their late teens formally shook hands when they met up in a café. The fact that male cousins or best-friends unashamedly kiss each other on the cheeks, had them in stitches.  Imagine an Irish pub on a Friday night – a well-placed thump on the shoulder is the usual greeting, accompanied with a “Howya, ye old bollocks”. This is considered perfectly friendly and amicable in Dublin –  evidence perhaps of the deep-felt suspicion many young Irishmen have of intimacy. 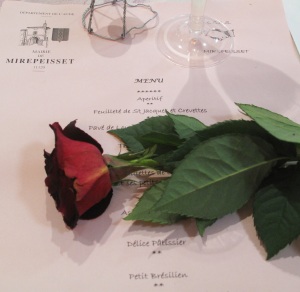 Valentine’s menu for the old

I’ve often wondered if this respect many French show for their elders could simply be that they take delight in older people’s well-being? It manifests itself in many small daily tasks and friendly gestures that I witness every day.  In fact the Mairie organises many events for its pensioners – none more extravagant than the yearly Valentine’s evening for the elderly – a feast that takes place in many small Languedoc villages.  Each year the over-65’s arrive in their droves, dressed up to the nines, to take part in this annual fiesta.

The all-out six-course menu this year included puff-pastries brimming with scallops and prawns in cream, seabass with champagne sauce, a pallet-cleansing sorbet well-doused with eau-de-vie de poire, duckbreast with wild mushrooms, a cheese course and a beautiful individual chocolate truffle tart. The entire lot was washed down with copious amounts of wine of course and a rose was presented to all the ladies. 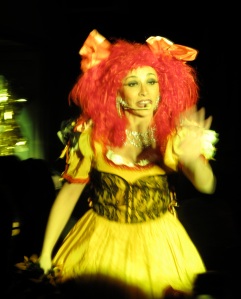 But this is not all. The 5-hour-long repas was accompanied by a cabaret that could rival that of Moulin Rouge. Pretty girls in suggestive costumes dance and sing romantic (or naughty) chansons of olden days throughout the meal. What makes it all the more fun, is that the showgirls really seem to be enjoying it too – tickling the men flirtatiously with their feather boas and placing their red lips on bald heads (the resulting marks being proudly carried home as ‘evidence’ of their lasting virility.)

And in between all the eating and singing and joking and laughing, there is the serious matter of dancing..  Not just a bit of limp shuffling around the floor. No sir!  We’re talking here about paso dobles, tangos, waltzes, cha-cha-chas and even a spot of line-dancing if you don’t mind! I have to admit that the passionate Argentinian Tango has lost some of its eroticism to suit the region and the elderly, but the flirting continues and it is quite evident that these oldies do not feel old. 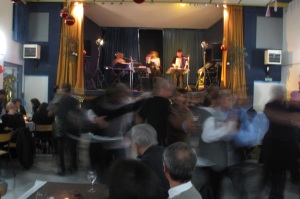 In a country where the general retirement age is still set between 55-60 these people have a long retirement to look forward to. Most keep themselves young by looking after their grand- and great-grand children, helping their children look after their vineyards, walking, socialising, holidaying, travelling and other such pleasant pursuits if their pensions permit it.  But there’s one thing they all have in common: they enjoy their troisieme age… 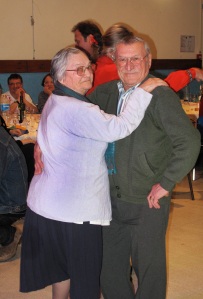 Manolo and his Julietta

Manolo is a life-loving, virile Spanish-born 80-year-old who up to 3 years ago kept his 3 girlfriends extremely satisfied. Two are no longer part of this world and so now he has promised to be loyal only to Julietta – whom he calls Marrrrrileeen Monrrrroy! Nuf said.

Jacko, also in his late 70’s and a well-known womaniser in his time, still hasn’t given up hope…

And so life continues, here in the small village of Mirepeisset.  And nobody ever seems to get a chance to be bored!