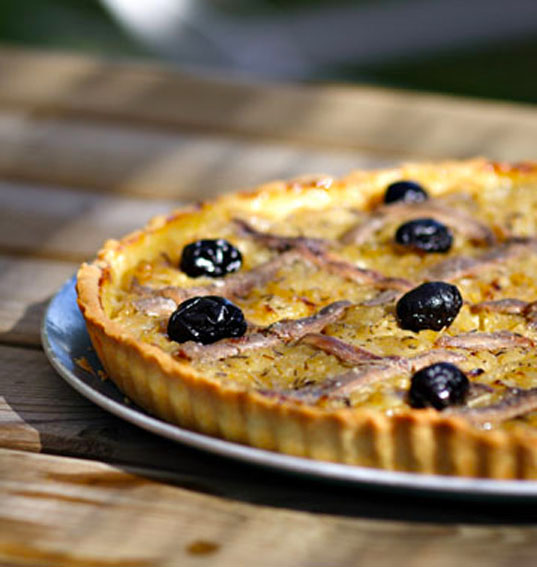 Pissaladière is very popular in Provence – either as lunch with a salad, or with an apéritif.  Traditionally this is made with a bread base (we have no cows in the South, so no butter for pastry) which makes it somewhat chewy rather than crisp.  But tastes have changed and most people demand crispier and flakier pastry and so nowadays many Provençal cooks and even bakers make Pissaladière with puff pastry. However, this makes it more greasy so I still prefer the original bread version.  This may seem like an enormous quantity of onions but they’ll shrink to half the amount.    To serve 6-8 people you’ll need:
6 tablespoons olive oil
5 large onions, peeled and finely sliced
4 sprigs of fresh thyme
375g of bread dough (or similar quantity of puff pastry)
16 anchovy fillets in oil, drained
24 black olives, pitted and halved
Put the olive oil in a large pan and stir in sliced onions. Cook over a low heat, stirring regularly, for 30 minutes. The onions should be soft and transparent, and not browned.
Scatter with thyme leaves and cook for a further 5 minutes, stirring all the time. The liquid should have evaporated (if not pour it off but don’t throw it out – it makes a great base for soup). Remove from the heat, season with a little pepper and allow to cool.

For the BREAD DOUGH (with dried or fresh yeast)
This basic bread recipe is great for pizzas or focaccias.
20g fresh yeast (or 1 packet of dried, quick action yeast)
280 ml lukewarm water
½ tsp of sugar
450g unbleached white bread flour
1 tsp salt
1 tbsp olive oil
In a measuring jug mix your yeast with a few tablespoons of lukewarm water and add the pinch of sugar. Stir well and set aside for 10 minutes – it should have a nice frothy head – just like Guinness!
In a large bowl, mix the flour, salt and olive oil together and make a well in the centre. Pour in the yeasty liquid and work to a soft dough, adding as little flour as possible to avoid a dense bread.  Knead this for 8-10 minutes or so, until smooth and elastic. Place in an oiled bowl, cover with lightly oiled plastic wrap (or a wet tea towel) and leave in a warm-ish place for about 1-2 hours, or until doubled in bulk.
Punch it down with your fist to knock the air out and knead for another 5 minutes or so.   Roll out the dough thinly and place on the baking tray.  Rest for another 30 minutes in a warm place, until somewhat puffed.  Meanwhile turn the oven to 200’C.
Spread the dough with the onion mixture.  Cut the anchovies in half lengthways (scissors are an easy way to do this) and arrange on top of the onions in a pretty lattice or star design, then dot with the halved olives.  Bake for 15-20 minutes, until the pastry/bread dough is golden. Serve lukewarm.